For years now I've been working along side filmmaker Michael Todd Schneider of magGot films. While film making remains his focus, you should also know that he also does experimental music under the moniker of Porcelain MagGot.

In fact we realized that both Requiem and Porcelain MagGot are 16 years old this year.

We are celebrating this in multiple ways.  First of which is a live collaboration June 15th at the Garfield Artworks in Pittsburgh, PA.  This is going to be a multimedia event with film and some performance art dabblings as well. A spectacle for sure.

At the show we will have available a split CD limited to 16 copies. Hand numbered by MagGot himself. All packaging and art work done by him. It's called "premature" and contains two tracks. One is Michael remixing and intertwining our earliest material into one. In Michael's words "an incestuous marriage celebrating sixteen years of musical dread". The second track is one of our rehearsals for this live event. Each track is about 20 minutes long.

Finally to celebrate these 16 years we will be releasing an official split CD entitled "Sweet 16" to be released by nowiswhy records out of Pittsburgh.  The packaging for this release is going to be really special.  More details on this special release as it unfolds..... 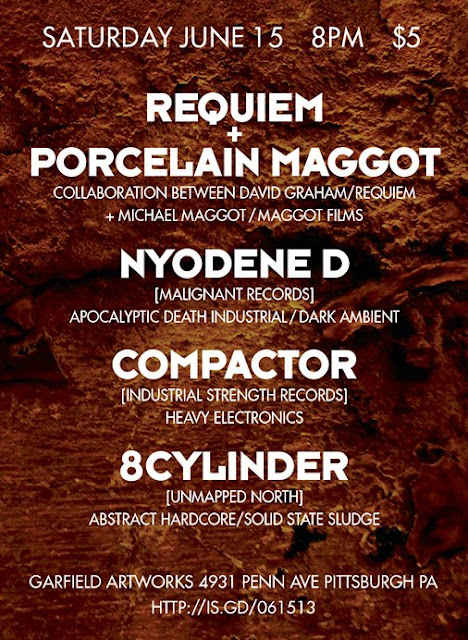